upcoming tracks include Strangers in the Night, St James Infirmary Blues, Besame Mucho, Until the Real Thing Comes Along, Same Girl, The Good Life, Isn’t This a Lovely Day…..

Homecoming-a tribute to my teacher/friend Ellis Marsalis, Jr. I’ve always loved this composition of his from the great duo recording he did with Eddie Harris. I wanted to pay homage in some way to Mr Marsalis and share my grief/joy I’ve been feeling since he passed a few years ago during our lockdown and from just knowing/learning/being grateful from learning music/life lessons from a New Orleans/World/Universe Piano Professor. I was inspired to also compose lyrics and sing on this song. Inspiration coming through remembering his time/music with all of us. A master musician/teacher/mentor. A music/song dedication to Mr Marsalis, Jr. and his family/friends/students and his Homecoming, with his beautiful wife, Dolores Marsalis.

A Homecoming with many possibilities and dimensions. I was also inspired by my beautiful new bride Tara, and us becoming recent newlyweds. A wonderful gift of new Homecoming for the both of us and for our children and weenie dogs ❤️  Matt

I will always love

Coming home to my beautiful wife

And I will always love

Being with my true love

inspired by “Homecoming’ composed by Ellis Marsalis, Jr and by Ellis & Dolores Marsalis and family  and my beautiful wife/my best friend, Tara and family.

My musical/spiritual/career path/journey has always been to offer and serve through sharing music and hopefully bringing everyone to sing and play music together. To hopefully inspire and heal communities through music and connection. To hopefully heal families and to pass down the gift of music to our children and to hopefully ease the pain and suffering of the elderly through music, and stories of my testimony.

Music heals and unites people across borders and quarantines.

I pray for the strength and wisdom to always  serve and heal through my gift of music with an open heart. 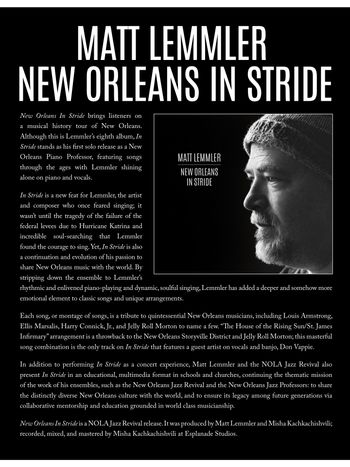 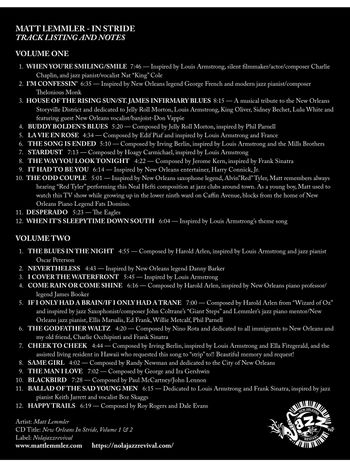 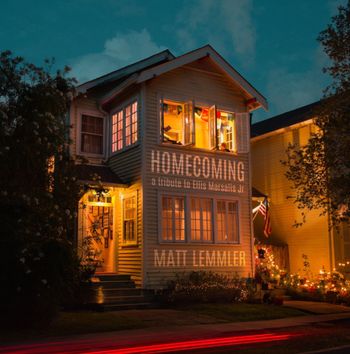 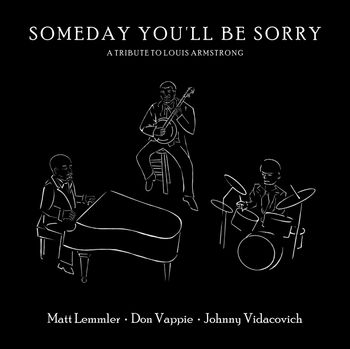 New Orleans In Stride brings listeners on a musical history tour of New Orleans. Although Lemmler’s eighth album, In Stride stands as Lemmler’s first solo release as a New Orleans Piano Professor, featuring songs through the ages with Lemmler shining alone on piano and vocals.

In Stride is a new feat for Lemmler, the artist and composer who once

New Orleans In Stride brings listeners on a musical history tour of New Orleans. Although Lemmler’s eighth album, In Stride stands as Lemmler’s first solo release as a New Orleans Piano Professor, featuring songs through the ages with Lemmler shining alone on piano and vocals.

In Stride is a new feat for Lemmler, the artist and composer who once feared singing; it wasn’t until the tragedy of the failure of the federal levees due to Hurricane Katrina and incredible soul-searching that Lemmler found the courage to sing. Yet, In Stride is also a continuation and evolution of his passion to share New Orleans music with the world. By stripping down the ensemble to Lemmler’s rhythmic and enlivened piano-playing and dynamic, soulful singing, Lemmler has added a deeper and somehow more emotional element to classic songs and unique arrangements.

Each song, or montage of songs, is a tribute to quintessential New Orleans musicians, including Louis Armstrong, Ellis Marsalis, Harry Connick, Jr., and Jelly Roll Morton to name a few. The House of the Rising Sun/St. James Infirmary arrangement is a throwback to the New Orleans Storyville District and Jelly Roll Morton; this masterful song combination is the only track on In Stride that features a guest artist on vocals and banjo, Don Vappie.

In addition to performing In Stride as a concert experience, Matt Lemmler and the NOLA Jazz Revival also present In Stride in an educational, multimedia format in schools and churches, continuing the thematic mission of the work of his ensembles, such as the New Orleans Jazz Revival and the New Orleans Jazz Professors: to share the distinctly diverse New Orleans culture with the world, and to ensure its legacy among future generations via collaborative mentorship and education grounded in world class musicianship.